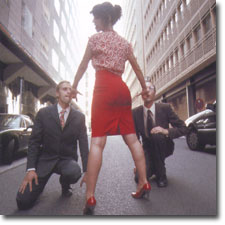 But who is Barbara Brockhaus? No one you ever heard of because Barbara Brockhaus is a fictional character you can only find in large and cold office buildings. Barbara is a secretary who likes to fantasize all day long about sexy and hot adventures to escape her ultimate daily boredom.

Angie Reed presents the best of Barbara Brockhaus with music for the laZy and not the BureacraZy musically and pictorially retraces Barbara's most poignant fantasies. The sound is a mix of hip hop electroclash with a touch of garage rock and a high dose of drum machine/techno beats. The CD also comes with a booklet and 2 videos. The episodes unfold song after song under the narration of Angie Reed's naive voice (in monologue format at times) which tends to contrast with the occasional dirty lyrics. It is like a modern rock opera with Crumb drawings in color assembled into a screenplay.

I Don't Do Dirty Work has a resonant bassline that will surely make you bob your head. It starts with instructions from Lars Langenscheidt, Barbara's boss.

You can definitively hear the hip hop influence in Cosmo Ho. This song rhymes in [o]: Warhol-alcohol-becoz-panty hose... you get the idea.

No Pony is one of my favorites, probably because it reminds me of Stereo Total for whom Angie played bass on their second record in 1996.

I Think I Love Hi has a strong garage rock feel.

Disco Club sounds like Euro Trash Girl by Chicks on Speed with a Southern accent. The story is about Barbara loosing her wallet in a disco club. Drums beats sounding just like thunder and fireworks mark the pace.

Brrockaround is a restful instrumental song.

I like the catchy xylophone riff over a hypnotizing bassline in Habibi.

Angie Reed is a multi-talented creative Italo-American artist living in Berlin where she quickly made friends with the kararoke electroclash divas of Chicks on Speed. In addition to her sophisticated musicianship, she is a terrific graphic designer, an accomplished cartoonist and musical screenwriter. Her work is mostly eccentric, colorful and provocative. She likes to describe her music as "entertaining," and I couldn't agree more. This CD is simply fun. You may wonder about her live performance... Well, it's now Angie's turn to make you fantasize!

Angie Reed in the gullbuy: