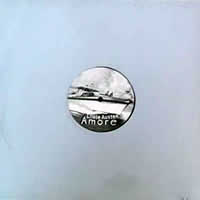 The latest from lounge rat Louie Austen is his swansong for Cheap before releasing his second full length on his new label, Kitty-Yo.

There are 2 new songs on this, both living up to and exceeding what you might have hoped for after listening to his Consequences CD on Cheap.

Amore swings with a disco beat like Tom Jones on a really good day. The lyrics give praise to a woman he loves aplenty. Really fun!, especially the almost Señor Coconut like break in the middle.

The flip moves the action from the deck of a speeding cabin cruiser in the sun to a late night room alone with a girl you just met, together in an understanding less than honorable. Who better to play the lover than Peaches? Louie's new label-mate takes the helm as the object d' desire in the raunchy Grab My Shaft.

The music on Grab My Shaft is more electronic than the A-side. It has a real 'Cheap Entertainment' sound, probably with Gerhard Potuznik or Patrick Pulsinger providing the mood. Thankfully the song has nothing that would prevent it from being played on-air except its last second, which can easily be cued out by an awake DJ.

Louie Austen in the gullbuy: