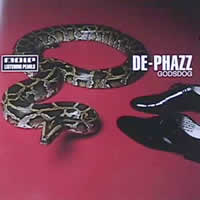 The second De-Phazz CD is the ticket for me. In the gullbuy 2 weeks ago I reviewed Detunized Gravity, the first De-Phazz CD. That disc was good enough to make me buy this one, but did not prepare me for how much I would like Godsdog.

Jazz Music (#3), the track I first loved by De-Phazz from the first (of three so far) Costes compilations mixed by Stephane Pompuognac is here. Jazz Music is pretty much a perfect song. It is extremely catchy, with a mambo beat set in a very contemporary flow with well chosen samples that take the song to stellar height. It achieves what any artist in the downtempo genre strives for when they want to bring the tempo up a bit. The track just speaks 'cool' - no contest.

De-Phazz have a trombone player in their ranks which they take advantage of on many songs too. If any of you know the classic Groove Armada song At The River you know what I mean. De-Phazz are clever with the influences they let seep into their music. The Mambo Craze (#1) is pure mambo, halfway between the Japanese artist Comoesta and the SF band Pink Martini.

De-Phazz tackle triphop in Zero Zero (#5) with a vocalist (Charity Sanders) that sounds like New Jersey artist Suran Song (of Suran Song In Stag) if she decided to gloss a beat with her voice.

Then there are strange things such as a line from Minnie Ripperton's Loving You creeping in to the song April Shower, or the line "stick around we'll tell you more" from the Sesame Street Miss Piggy song Yellow Polka Dot Bikini on the title song Godsdog (#9).

Godsdog is one of my favorite songs from this record, a disc I highly recommend to anyone who likes downtempo such as Kruder & Dorfmeister or stuff on the Eighteenth Street Lounge Music label, but does not want to be caught in the cage of a restrictive genre.